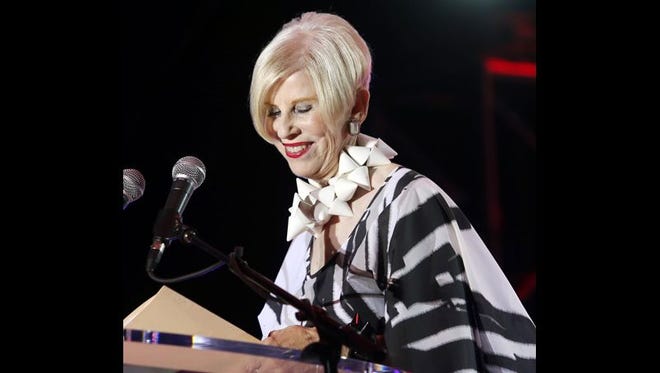 Rabbi Sally Olins saves many of the inspirational and religious stories she receives and doesn't want them to be lost forever. The pandemic gave her the time and opportunity to put those stories into her book, "Coffee House Rabbi."

Olins, who was rabbi at Temple Isaiah in Palm Springs from 2006 to 2016, said many of these quotes and stories have been used in her sermons and she felt it was important to share them with the community.

"The reality is that when I'm gone, and I'm not ready to go but when I am, these will be lost forever," Olins said. "I don't want them to be lost. I don't know who sent them to me in the world of clergy, but rabbis do this all the time, ‘Oh I heard a great story I'm going to send it to you.’ You don't necessarily say who the author was and some of the stories are from the Bible that everyone knows."

"Coffee House Rabbi" also includes inspirational quotes from His Holiness the 14th Dalai Lama, Oprah Winfrey, Gandhi and more. The book is self-published and available through her website, rabbisally.com.

She hasn't been "overwhelmed with sales," but people are buying multiple copies of to give to friends and relatives.

"That's a wonderful feeling and exactly what I want the book to do," Olins said.

Olins led meetings at the Hyatt Palm Springs on the first and third Sundays of each month on the subjects of faith and guidance, inspiration and motivation and more. She has continued the meetings over Zoom during the pandemic.

But she said she has been finding it difficult to provide services for the sick, adding she made visits to local hospitals at least once a week. She's also done a large number of funerals, many who passed away from COVID-19

Olins said she does more funerals than weddings and baby announcements, and said this has been a difficult year of comforting and "trying to bring about healing."

"In most cases when someone is ill, you've met the family and you can bring far more comfort and closure to them," Olins said. "When someone asks if I’m available to do a service, sometimes we were only allowed three people and I was one of the three. I've done them on Zoom, but it’s very painful the family couldn't be there to say goodbye."

Road to becoming a rabbi

Growing up in Cincinnati, Ohio, and Beverly Hills, Olins said she felt a calling to become a rabbi, but women were not allowed to ordain in Conservative Judaism. But she still enjoyed attending temple services on Saturday mornings with her grandfather and studying the Torah.

"I had friends who would say to me 'girls can't be rabbis,'" Olins said.

Olins went on to UCLA earning a teaching credential, and then a Master of Arts from the University of Judaism in Bel Air. She taught high school English and modern dance at Verdugo Hills High School in Tujunga before opening a dance and exercise school in Westwood, but never forgot her religious calling.

When the Rabbinical Assembly voted to admit women in 1985, and Olins was already prepared and began her journey.

Her late husband of 57 years, Jay, was supportive. She describes him as "the most selfless man I've ever known in my life," adding he made arrangements for her to fly to New York for seminary school and back home every week for four years.

"I flew in on a Sunday morning, went to seminary school on Monday and Tuesday and then took a flight home. I would work with an Orthodox rabbi on Thursdays and Fridays, and then Friday night and Saturday morning I had an internship at a temple. On Sunday I flew back (to New York)."

She was ordained in 1989 as a conservative rabbi at the B'nail Hayim Temple in Sherman Oaks, the first time an ordination took place on the West Coast. She and her husband moved to Palm Springs in 2006.

If there's one thing Olins wants readers to take away from "Coffee House Rabbi," it's to "find the positive." She said it's what helped her through the death of her brother due to cancer in 2015 and Jay to myasthenia gravis in 2018.

"I do have a lovely family. I have a daughter, she has a husband and two children. But the immediacy of my family is gone. I know how I lived my life is what made it possible, but it doesn't take the pain away, it just allows you to be able to get through the difficult times."